My dog died today.  Her name was Bluebell—Blue.  When I went to bed she was fine, I thought, peacefully gnawing on her bone in the backyard.  I was wrong.  She was stuck in the backyard; stuck by paralyzed back legs, courtesy of an invisible erosion of her spine–invisible until today’s X-ray.  Last night, she was stuck, alone, and scared, and I was asleep in the house.  I should have sensed her trauma.  She sleeps at the side of my bed, faithfully every night.  But not last night.  Last night, I thought she was outside chewing the bone I gave her, so I didn’t call her.  I didn’t notice the missing slap-slap-slap of the doggy door indicating she was inside with me, walking around–walking.  I didn’t look for her until this morning.

This morning, there was no Blue to watch out for as I stepped out of bed.  She wasn’t on her doggie bed in the living room, either.  “Blue!”  I called her curtly, annoyed that she wasn’t wagging her tail “good morning.”  Instead, she was laying down in a corner of the backyard, paralyzed.  When I came to the door to call her, her head popped up and her tail jumped up and back down again, a groundhog covered in feces.  But she didn’t get up.  She couldn’t.  She pushed herself up with her front legs, but could do nothing more.  My legs nearly mimicked hers.  I couldn’t move.  I didn’t want to go to her, to magnify the reality of what today would be, but I wouldn’t stop myself.  Her whimpering and wagging tail whirl-pooled me towards the new nucleus of my world:  Bluebell and her legs.

The new center, Bluebell’s corner of the yard, seemed countries away from the house.  I just wanted to bring her inside, place her on her doggie bed, or at the side of my bed, and restart this day.  I wasn’t ready.

I found Blue at a softball field in Las Vegas, Nevada, twelve years ago.  A woman was trying to get rid of the “runt,” and Blue was going to the pound if she couldn’t find someone to take her that day.  I paid the woman $100, and she gave me the sweetest, little black face and a worm-infested belly in return.  My step-son named her after the popular “Blue’s Clues” character, and over a decade-long love story began.

When I had my second child, we also had two black labs in a very tiny townhouse in Maryland.  After much conversation, we decided to find Blue (and my then-husband’s dog, Bean) a new family who we felt had more time and space for the girls.  I cried after we drove away from Blue’s new home.  By that time, Bluebell had been mine for six years.  I underestimated the hold she had on my heart.  And I completely disregarded the hold I had on hers.  Within two weeks, she had run away from her new place, and the pound tracked me down through the chip embedded in her neck.  We picked her up from the pound and returned her to her new family.  Blue would not be deterred.  Within five weeks, she had run away three times.  She was looking for me.  I couldn’t go through a fourth phone call.  She won and we would simply keep her home, where she clearly belonged.  That was the only time I mistakenly thought I didn’t have enough room for Blue.

When my ex moved out, Blue’s name was among the possessions he wanted to take with him when he left.  The guest bedroom set, the piano, the X-box, the big screen television, Blue, the extra set of pots and pans, the lawn mower…I put up no resistance about anything on the list, except one thing that was not a possession, but a piece of my heart.  And when I was in Afghanistan for a year, Blue was loved and cared for by my aunt, uncle and cousins in Indiana–she was spoiled with stuffed animals and food off the table.  I worried she would run away from them, like she had so many years before, thinking I was trying to abandon her.  But she didn’t.  She must have known I was coming back.  When I did, I was greeted by her tail wagging so hard that it would leave marks on my shins, knock down little toddlers, and break lamps foolishly placed on end tables.  Her spirit was in her tail. 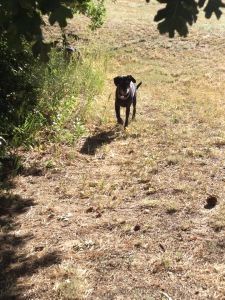 Her spirit was there this morning, as she lay stuck in the backyard, but the strength was gone.  I had heard stories of mothers who exercised super-human strength, lifting cars off their children when they were in danger.  My strength didn’t activate.  I couldn’t lift Blue’s 60 lb body.  I could barely hold my head up.  Instead, I knelt next to her and cried.  I wasn’t ready for today.  And I needed help.  I fetched a blanket and was able to lift her onto it in order to drag her across the backyard.  She cried softly along the way.

My neighbors weren’t home to answer my knock, yet Blue was whimpering.  She was scared and still, her tail un-moving.  A guardian angel in the form of a man taking a walk with his daughter, came over the hill.  When I tried to ask him for help, I couldn’t get the words out, choking on all the memories:  obedience training at six months, running buddy in Maryland, grief counselor during the divorce, big sister to the boys, and her recent difficulty getting in and out of the car during trips to the dog park.  All I could say was, “I need your help.  My dog can’t walk.”  Blue would have been so happy to have more visitors.  But she didn’t even lift her head when we lifted her into the car.  Her tail was quiet.

I wasn’t ready for Bluebell to die today.  I was getting myself ready, for two years from now.  Not now.  The vet reminded me that this was the best way to go:  fine one day and down the next.  No suffering, no gradual decline of quality of life.  Fine one day and down the next.  When the boys and I entered the room to say our goodbyes, her head came up and her tail popped–just once, but it jumped up then down in a final wave.  I cried over her as she took her last breaths, her paws already cold.  Her spine had deteriorated due to some tumor, some thing I could not see growing inside her body, eating away her bones from the inside.  The vet promised me that I took the best care of her.  She promised me Blue had a good life.  She promised me I did right by Blue.  But all I could focus on was the stillness of her tail.  Its silence fills her space in my heart, and my heart mirrors Blue’s legs:  fine one day, down the next.

I'm centered in faith, doing my best not to screw up my children as they gallop through life, and I'm ready to share (probably over-share) my experiences with those who care to read about them.

Unauthorized use and/or duplication of this material without express and written permission from this blog’s author and/or owner is strictly prohibited. Excerpts and links may be used, provided that full and clear credit is given to Military Momma: Adventures of Nanny Panny with appropriate and specific direction to the original content.

Journeys From Over The Rainbow And Back Again

A personal blog which showcases interesting stories about the author's musings, insights, passion, experiences, thoughts, and anything life has to offer.

Living a Life of Wisdom, Purpose and Heart

THE BEST OF POETRY

My great Wordpress blog
this is... The Neighborhood

the Story within the Story

To share my passion of motorsports to all my readers! To get people of all ages and income levels into the absolute best vehicle possible for their specific needs and to make driving enjoyable every single day!

4 out of 5 dentists recommend this WordPress.com site

A Library of Literary Interestingness

the secretion of art by Rhian Ferrer

Editor at Longreads. Automattician since 2012. Californian since 1979. Junglist for life.

Sozo: To be made whole. The blog of Bre'anna Emmitt
Loading Comments...